A liquid-filled glass bottle can break when an impact is imposed on the bottle (Fig. 1). High-speed observations indicate that the collapse and rebound of cavitation bubbles formed just after the impact play a dominant role in this bottle fracture. Cavitation-induced damage on its surroundings can also be found in several industrial applications (e.g., pipes, propellers, etc.). In order to avoid the cavitation-induced fracture, an accurate prediction of cavitation onset is important. However, conventional cavitation number C, which is based on the mean flow velocity, predicts cavitation onset with some prefactors. In this paper, we derive a new formulation of an alternative cavitation number Ca, which takes the contribution of imposed sudden acceleration into account instead of the fluid inertial term. We conducted two series of experiments in different two countries with varying parameters in order to validate proposed cavitation number Ca (Fig. 1). We imposed an impact on the tube filled partially with liquids. In experiments conducted in Japan, we imposed an impact on the bottom of the tube and estimated the magnitude of the imposed acceleration by using a high-speed camera (Fig. 1(a) and 1(b)). In experiments performed in the USA, we struck the top of the tube to impose acceleration and measured the imposed acceleration by using an accelerometer placed on the tube bottom (Fig. 1(c) and 1(d)). Varied experimental parameters were, the reference pressure, the vapor pressure of liquids, the density of liquids, the height of liquid inside the tube, and the magnitude of imposed acceleration. We detected cavitation onset by high-speed photography. The temporal resolution was up to 100,000 frames per second, and the spatial resolution was typically 0.1 mm per pixel. Experimental data from two different countries agreed well with the proposed cavitation number Ca=1, regardless of all varied experimental parameters. It indicated that the proposed cavitation number Ca is a reasonable criterion for the cavitation onset in an accelerated liquid. 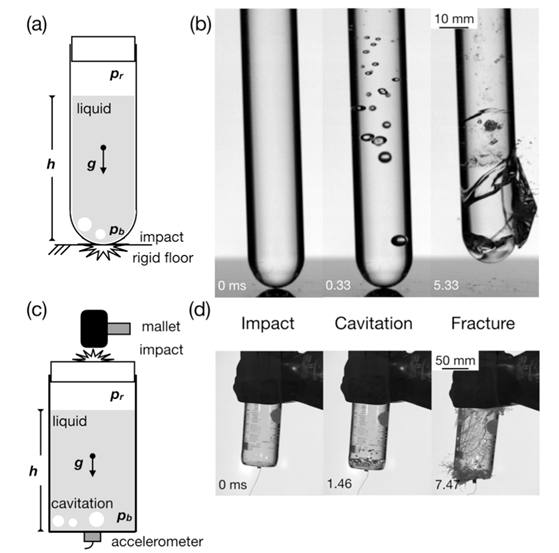 Fig. 1 The schematic of experimental system from both countries and image sequences of cavitation onset and bottle fracture by acceleration for each experiment (impact from the bottom (a, b) and from the top (c, d). More details can be found in Pan, Kiyama, et al., PNAS, 2017). h, pr, and pbﾂrespectively indicate the depth of liquid column, the internal pressure, and the liquid pressure at the tube bottom. g indicates the direction of gravity. This figure is cited from the proceeding of the annual meeting of JSME 2017.