Home > Activity > The hot topic on study, technological development and R&D in fluids engineering fields > A study of aerodynamic sound generated from an airfoil placed in a flow with turbulence

A study of aerodynamic sound generated from an airfoil placed in a flow with turbulence
(2nd Report: In the case of airfoil subjected to circular-cylinder wake)

To clarify the mechanism for aerodynamic sound to be generated from an airfoil in a flow with turbulence, numerical simulations have been carried out for a flow around an airfoil subjected to the wake of a circular cylinder. This abstract presents the results of decoupled simulations of computational fluid dynamics (CFD) and computational aeroacoustics (CAA) based on large eddy simulation (LES) and Lighthill’s acoustic analogy. Figure 1 show the flow field around the airfoil. A circular cylinder is installed upstream of the airfoil in order to generate turbulent inflow condition. The test airfoil has the NACA0012 profile with a chord length of 150 mm and a spanwise length of 7.5 mm, and it is set at angle of attack of 9 degrees. The wind velocity is set to 30 m/s, which results in an airfoil Reynolds number of 3.0 × 105. The circular cylinder is set 100 mm upstream of the leading edge of the airfoil. Figure 2 shows computational grids respectively used for CFD (left) and CAA (right). In our CAA simulations, sound-pressures spectra and acoustical fields are predicted, respectively, by Curle's equation and by solving wave equation with Lighthill's tensor computed by incompressible LES. Figure 3 show the results of aerodynamic sound spectra simulations. Figures 4 and 5 show that the dominant source of the aerodynamic noise radiated from the airfoil flow under turbulent inflow condition has been identified to be this stretch of the vortices by the acceleration of the mean flow near the leading edge of the airfoil, and the pressure fluctuation near the leading edge is remarkably high with turbulent inflow condition, and that the vortices collide with the airfoil surface and they are stretched from the stagnation point to suction surface where the mean flow is accelerated. When they flow near the leading edge of the airfoil, the vortices in the cylinder wake are stretched due to the acceleration of the main flow, forms strong source of sound, and radiated intense sound in the upstream direction. 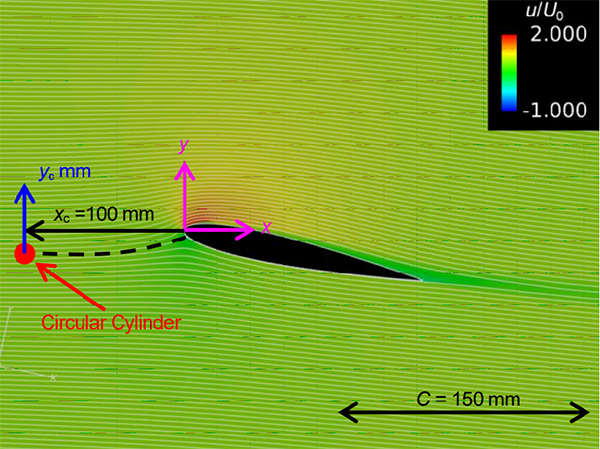 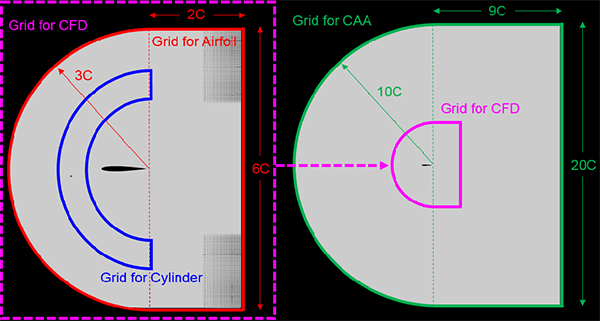 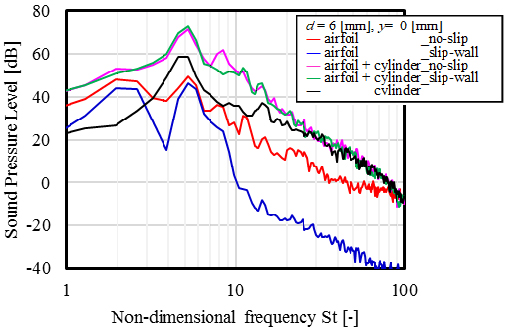 Fig. 3 Comparisons of predicted frequency spectra of sound radiated from flow around airfoil and/or circular cylinder

Fig. 4 Computed sound fields at Strouhal number of 5.0 radiated from flow around airfoil (left: Case A) and that around airfoil and circular cylinder (middle: Case B and right: Case C) 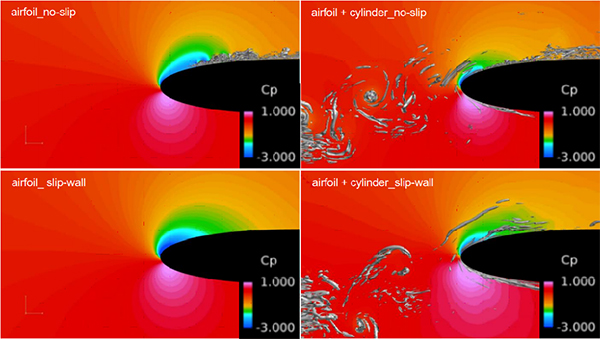