Sterilization in liquids by air plasma under intermittent discharge

It is estimated that about 7 to 10 % of contact lens users have eye damages in Japan. Three quarters of contact lens users are using multi-purpose solution, which is commercially available chemical disinfectant, but various microorganisms including Acanthamoeba are not fully eliminated. Plasma has potential to solve these problems because it not only generates gas which kills pathogenic microorganisms but also it can transfer the gas using the flow induced by the plasma itself. It can also sterilize without using hydrogen peroxide. The mechanism of inactivation of pathogenic microorganisms by plasma-generated gas is considered to generate hydroperoxide radical (HO2•), peroxynitrite (ONOO－) and nitronium ion (NO2+) that easily penetrate into the cell, and cause peroxidation of cell membrane and oxidation of protein. Also, peroxynitric acid (O2NOOH), nitrogen dioxide (NO2•) and singlet oxygen (1O2) are considered to contribute to sterilization. Therefore, we decided to develop a contact lens sterilization case using plasma. By placing dielectric-barrier discharge electrode on the back side of the top of the contact lens case and applying ±1.6 kV，40 kHz, we generated chemical species consisted mainly of ozone and the gas flow. The generated flow creates circulating flow under water in the case, and the dissolved chemical species sterilize the contact lenses. This time, we went through the procedure of plasma generation time 3 seconds and the plasma stopping time 6 seconds repeatedly and developed the method of sterilization while cooling down the electrodes. Then, we succeeded in decreasing the nitric acid concentration from 110 mg/L to 37.7 mg/L, and increasing the ozone concentration from 2.5 mg/L to 4.5 mg/L. It was also shown that the sterilization was completed in 40 minutes in air and 80 minutes in water.

Fig. 1 Schematic of the plasma sterilization case for contact lenses. 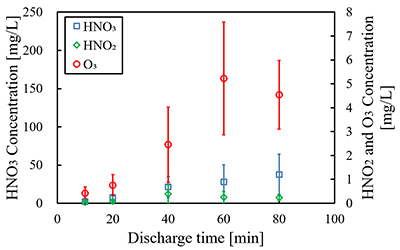 Fig. 2 Concentrations of O3, HNO3 and HNO2 with respect to the discharge time.