A wave power generating system is classified broadly into a moving body type, an overtopping wave type, and an oscillating water column (OWC) type. The moving body type is a system which changes the motion of floating body into energy. There are the systems using the pitching and rolling motion, the oscillation of pendulum, and a point absorber which drives a piston or a linear motor installed in the seabed. Moreover, there is also a system which changes the rolling motion of floating body into torque with a gyroscope. The overtopping wave type is a system in which the hydro turbine is driven by the low head sea water in the reservoir on the land or the ocean that stores the overtopping wave water. An oscillating water column type is a system in which an air turbine is arranged at the upper part of the air chamber installed on the water surface, and a turbine is driven by the oscillating air flow which is produced by the motion of the water surface in the air chamber (OWC) excited by the up-and-down motion of a water wave. The Wells turbine and the impulse turbine are mainly used for the oscillating air flow. On the other hand, the early system also installed a usual turbine which is driven by the unidirectional flow into which the rectification valve changes the oscillating flow. The optimum system of the oscillating water column type wave power generation is designed by coupling the characteristics between the air chamber and the turbine. 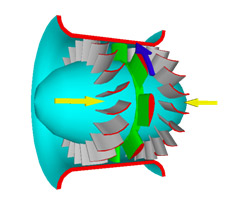