Polymer electrolyte fuel cells (PEFCs, PEMFCs) are gaining increasingly more attention as clean and efficient energy-conversion devices. Vapor and liquid transport has a strong impact on the power generation characteristics and efficiency of PEFCs, and so proper water management is needed for efficiency and durability. However, water transport factors are not well understood, particularly during unsteady operation窶俳ften the case in vehicles and distributed stationary power generators. In this report, to understand and generalize the effects of local water transport on PEFC performance, transient mass transport characteristics inside a PEFC were investigated experimentally and numerically. For this purpose, we developed an unsteady two-dimensional numerical model based on mass- and charge-conservation equations in the channel, gas diffusion layer (GDL), and membrane electrode assembly (MEA).

Current load and voltage changes are frequently used as PEFC transient inputs, but lead to very complicated and intractable phenomena such as changes in the amount of generated water and electro-osmosis, state of the electrical double layer, and so on. Hence, stepwise changes in the relative humidity of the supplied gas were adopted in this study. The experimental and numerical transient responses were in good agreement under most operating conditions, and the reliability of our measurement methods for the water transport properties and our numerical model were confirmed. Here we discuss the dominant factor in the transient responses, and conclude that the transport resistance at the PEM窶敵DL interface is the largest and most dominant factor in a relatively dry state under unsteady operating conditions. 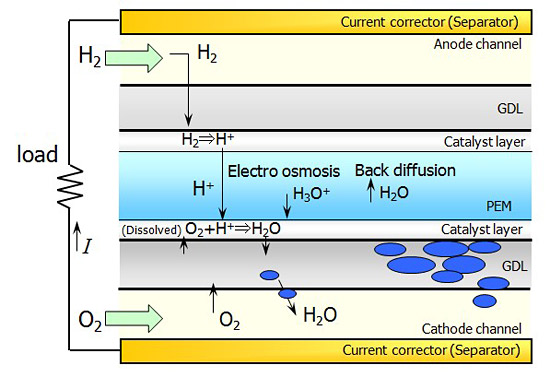 Fig. 1 The outline of mass transport phenomena inside PEFC 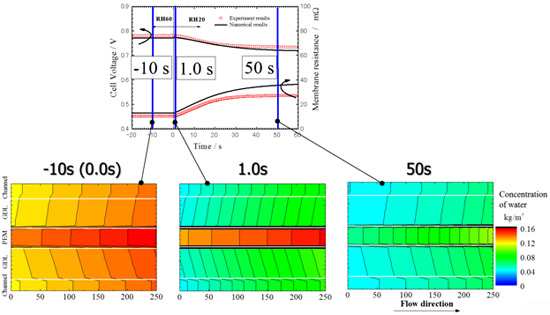