Recently, detection and identification technologies of single molecules and nanoparticles have attracted much attention, which are also expected to open the door to innovative techniques for fast reading of base sequences in deoxyribonucleic acid (DNA) and ribonucleic acid (RNA). In novel nanofluidic devices, such bio-macromolecules, usually aggregated in solutions, are transformed to a single linear-shaped structure via multiple processes in liquid flows. The linear polymer chains are introduced into much narrower space, so called nanopores, to identify the characteristics of molecular components. When a single nanoparticle passes through a nanopore less than 10 nm in diameter, the ion current of electrolyte ions is disturbed and thus, the particle transport can be clearly measured. This particle detection method using ion current modulations is known as the Coulter counter. However, it may not be enough to identify the characteristics of single molecules less than 1 nm in size. A recent progress supposes another method to sense a single molecule by using tunnel current, which sharply increases when a molecule is trapped between nano-gapped electrodes. In case of tunnel current, a captured molecule causes to decrease a potential barrier of quantum tunneling between the electrodes. These different measurement methods are preferable not only to detect the existence of particles, but also to characterize single molecules. We have been conducting theoretical and experimental studies to deeply understand the detailed mechanisms of electrical measurements of single nanoparticles. An electric circuit model was applied to represent a spike signal observed when a single nanoparticle was captured by the nano-gapped electrodes, where electrical charges on a nanoparticle were released to the circuit when it contacted the electrode. This expression was in reasonable agreement with experimental results. Furthermore, focusing on single base identification, we applied a theoretical model of tunnel current based on the Heisenberg uncertainty principle. The computational results evaluated the electric conductance of four base molecules of DNA, such as the order of adenine > guanine > thymine and cytosine, which provided good agreement with experimental and theoretical results by the other researchers.

Fig. 2. Schematic illustrations of (a) ion current and (b) tunnel current in single molecule detection. 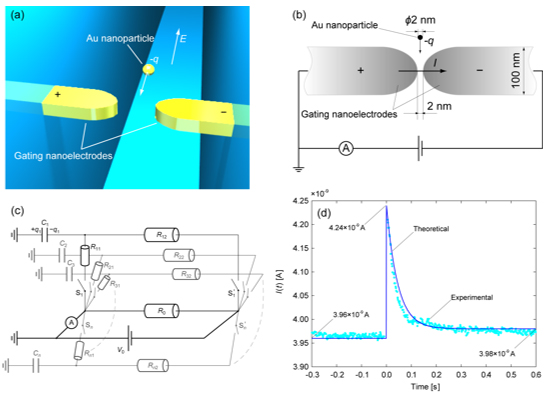 Fig. 3. Schematic illustrations of (a) nano-gapped gating electrodes in a nanofluidic channel to detect a single nanoparticle by tunnel current, (b) dimensions of the experimental system, and (c) electric circuit model of the single particle detection and (d) comparison between theoretical and experimental results.