Impinging jets are one of the most industrially essential cooling methods, for example, the gas turbine blades, drying and annealing processes, and electronic devices. Usually, jets are configured for a specific purpose, but the flow tends to be very complicated as each jet interacts with the others, especially near the impingement surface. There is still much unknown regarding the relationship between flow configuration and heat and mass transfer characteristics. The purpose of this study is to investigate the detailed three-dimensional flow behavior of a square array of circular impinging jets with complicated interaction and the relationship between the flow field and heat transfer on the wall.

The flow field was measured by scanning stereoscopic particle image velocimetry by changing the impinging distance L/D and jet-to-jet spacing S/D. Details of the flow features such as the vortex rings and roll-up structure toward the nozzle plate generated through the interaction of jets were obtained. It was also observed that the sizes of vortex rings and roll-up depend on L/D and S/D. From yz plane visualization, the near-wall flow and its interaction and separation points were indicated.

The temperature of the impingement surface was obtained by the thermosensitive liquid crystal method to correlate the flow field with heat transfer characteristics. The Nusselt number distribution is associated with the velocity component u that is the perpendicular to the wall and the decay in the fluctuations of velocity indicated by RMS between adjacent jets at near-wall. It is concluded that the spatial distribution of heat transfer condition is correlated to the flow field near the impingement surface. 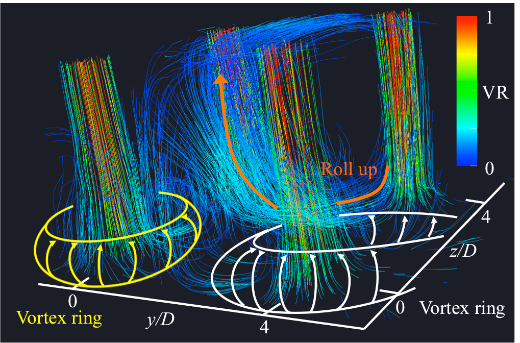 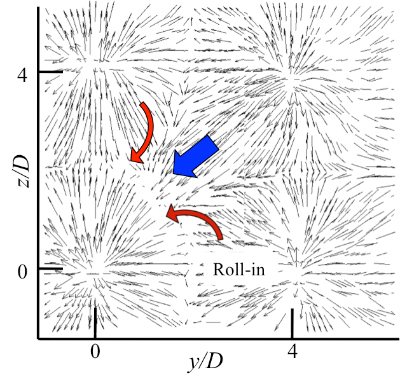