Aqueous solutions of some type of surfactants with salt, which develop wormlike micelles, exhibit strong viscoelastic property. Wormlike micellar solution (WMS) is expected to use various industrial applications but its flow behavior is very complex. Mechanical property of continuous fluids under a steady shear flow is homogeneous across whole region. On the other hand, some fluids, such as WMS, some polymer fluids and liquid crystals, generate two layers with different mechanical properties in parallel with the flow direction steadily. This phenomenon that forms two layers is called shear-banding, as illustrated in Fig.1. Microscopic structure in each layer is not completely understood, especially in WMS.

In this study, we investigate the microstructures of WMS on the shear-banding phenomenon under a step shear flow. The microstructure of the solution is examined by the optical anisotropy which is measured using a laser, X-ray or neutron beams, such as an analysis techniques of Flow-birefringence, SAXS and SANS. The local anisotropic information was detected by these methods but the spatial distribution of the anisotropy across the flow field has not been reported yet. In order to observe the spatial distribution of the optical anisotropy, we develop a new technique that is calculated from a photograph taken by the crossed Nicols method with a digital camera. In this technique, the entire flow field across both radial and circumferential direction can be observed, as shown in Fig.2. The magnitude of the birefringence |Δn'| which relates to the microstructures is evaluated by the hue profile calculated from the color profile. The orientation angle α at each band is estimated by the extinction angle. This analysis technique can evaluate not only the distribution of the flow-birefringence and the orientation angle but also the stress-optic coefficient C that is a material function related by the molecular or aggregate structure. We evaluate the distribution of C and discuss about the micellar structure in each layer.

An aqueous solution of 0.03M CTAB, 0.06M NaSal aqueous solution is used as a test fluid and it is known that it generate the shear-induced structure (SIS) over a certain shear rate. In the low shear rate region, the birefringence and the orientation angle are almost constant across the radial direction. These values are linearly related to shear stress τ  by the stress-optic rule, τ = (1/2C) × Δn' × sin(2α), where C is stress optical coefficient which is constant of proportionality determined by a molecular structure of the material. The value of C is -2.7×10-7 Pa-1 in this sample at low shear rate. However, at higher shear rate, it is changed because the micellar structure is changed to the SIS. The high orientation band (where C is constant) and the SIS-state band (where C is changing) are formed when the shear rate exceeds 1s-1. This result suggests that the molecular structure is locally changing to the SIS by shear flow. The fluctuations of the birefringence and the angle in the bands are synchronized with temporal stress oscillation at high shear rate, 8s-1, as shown in Fig.3. However, as for the stress optical coefficient C, only the value in the SIS-band is changed greatly with the stress fluctuation. In summary, it was revealed that the stress fluctuation is caused by the periodical structure change of the SIS-band. 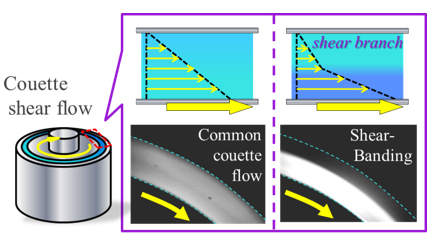 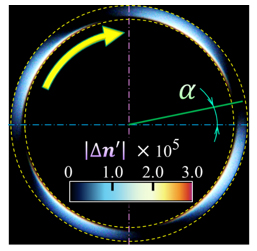 Fig.2  image of shear-banding in 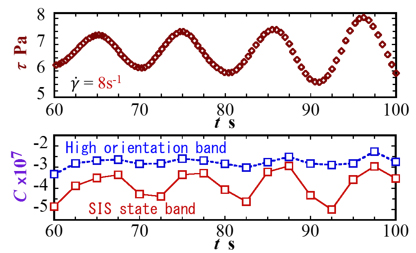