Some microorganisms propel themselves through the fluid by using rotating helical flagella, and many studies have been focused on the mechanics of swimming in purely viscous Newtonian fluids such as water. Recently, attention has been paid to the effects of viscoelasticity on the swimming of microorganisms, since many organisms commonly swim in complex fluid environments. In this study, we focused on the effect of viscoelastic Mach numbers M = V / c, where V is the speed of an object through a fluid and c is the speed of shear waves in the fluid. Joseph (1990) considered the problem of uniform flow of viscoelastic fluid past a body using a linearized theory and showed that a Mach cone will develop if M > 1, where the governing vorticity equation is hyperbolic when M > 1 and elliptic when M < 1. In this study, we examined experimentally the effect of viscoelastic Mach numbers on the propulsive forces of a rotating model helical flagellum in subcritical (M < 1) and supercritical (M > 1) conditions. Seven helical flagellum models with different pitches, helical diameters, and filament diameters were used for this study. The force measurement results show that the rotating speed dependence changes significantly at the speed whose Mach number based on the axial helical wave speed is unity. The propulsive forces are the function of only the tangential velocity along the helix when the tangential velocity is relatively high. The velocity fields obtained by a PIV (Particle Image Velocimetry) show that the flow patterns around a model helix with a larger pitch changes between subcritical and supercritical conditions. 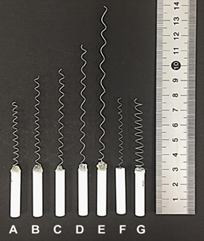 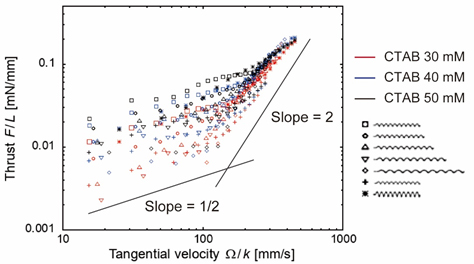 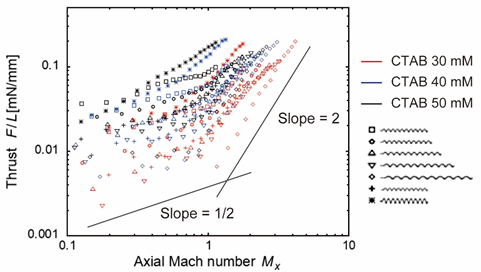