Recently, control of ion transport phenomena in confined narrow spaces is one of the most attracted topics in micro- and nanofluidics. Ionic current measurement techniques to detect moving electrically charged particles in liquid are expected to be applicable for allergen and biomolecule sensors. In previous studies, electrical signals successfully identified single target particles that passed through a small gap between sensing electrodes. However, the ionic current signals are also influenced by surrounding ions in electrolyte solutions. Therefore, it is an important issue to distinguish the spatiotemporal scale of ion dynamics.

In this study, we design an experimental device to continuously change microgaps between electrodes and investigate non-equilibrium ionic current responses known as non-faradaic current. Although electrode surfaces and electrolyte solutions are often treated as the assembly of capacitance and resistance like a series of RC circuits, ion transport gradually modulates the environments in actual solutions and therefore, the phenomena are nonlinear. Actually, such simple equivalent circuits are not steadily maintained because the capacitance and resistance of electrolyte solution are transient. Herein, we develop a couple of truncated conical and tapered ring electrodes to continuously change the size of microgaps, which has a taper angle of 5π/180 rad. to adjust the electrode distance with high accuracy. Consequently, spatiotemporal scales of ion transport phenomena in microgaps are clarified by changing the electrode distance and ion concentrations. Our findings suggest that electrophoretic transport and diffusion caused by the number of ions involved in the applied electric fields are reflected in the peak value and successive transient responses of ionic current. 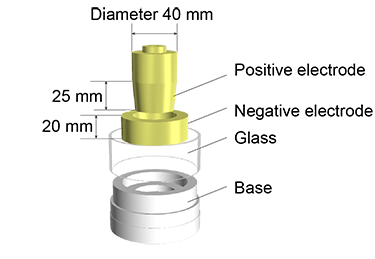 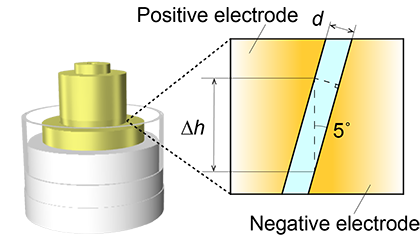 Fig. 2. Relationship between displacement Δh and microgap d between electrodes. 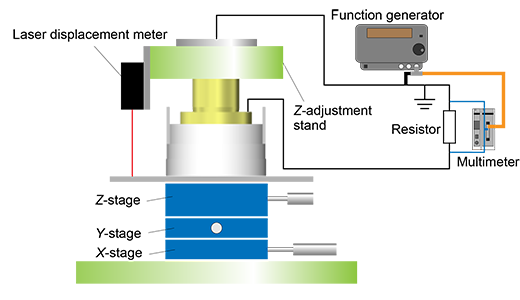 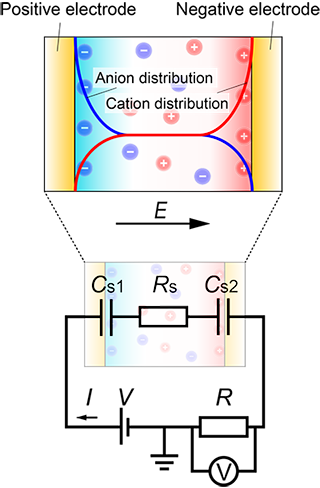 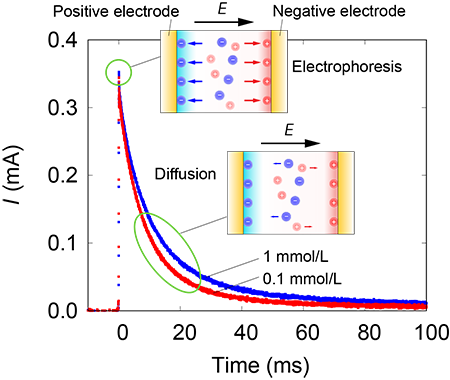