Figure 1 shows the conceptual configuration of closed-cycle MHD power plant(CCMHD). In the CCMHD, noble gas seeded with a small amount of alkali metal vapor is generally utilized as working gas. This power plant targets the total efficiency of 60 %. The performance of MHD power generator required for realizing this system is the enthalpy extraction ratio (E.E.) of 30% and the isentropic efficiency of more than 80%. Figure 2 depicts the recent results of high performance noble gas MHD power generation experiments which were conducted in Tokyo Institute of Technology. The enthalpy extraction ratio has already reached the target value of 30%. However, the isentropic efficiency obtained in the experiments was low compared with the target value. Therefore, the most important issue in future research for the realization of CCMHD is the improvement in isentropic efficiency.

Recently, a number of feasibility studies on applications of MHD on aerospace engineering field have been conducted by a lot of researchers in the US, Russia, Italy, Japan and many other nations. As one of the MHD applications, the active heat shield in Earth reentry and other atmospheric planetary entry flights, which is called “MHD flow control” or “MHD heat shield, has been proposed. In MHD flow control, a magnetic field is applied to a weakly ionized plasma flow in shock layer ahead of an entry vehicle, as shown in Fig. 3. The interaction between the magnetic field and the plasma flow induces the Lorentz force. The plasma flow is retarded by the Lorentz force, which leads to the enlargement of shock layer and the reduction of velocity gradient in a boundary layer around the vehicle. Consequently, the convective heating is mitigated by MHD flow control. Furthermore, the reaction force of the Lorentz force acts on a magnet installed in the vehicle, and as a result, a drag force can be increased by MHD flow control and a flight velocity can be reduced by it. Both the effects of shock layer enlargement and flight velocity reduction lead to mitigate convective aerodynamic heating. 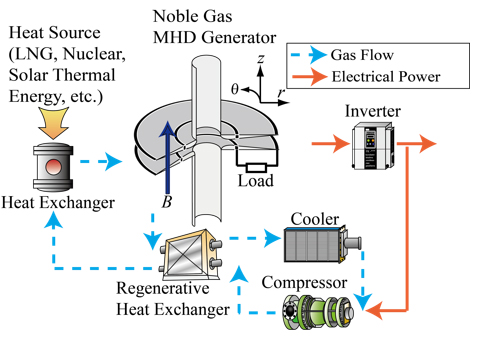 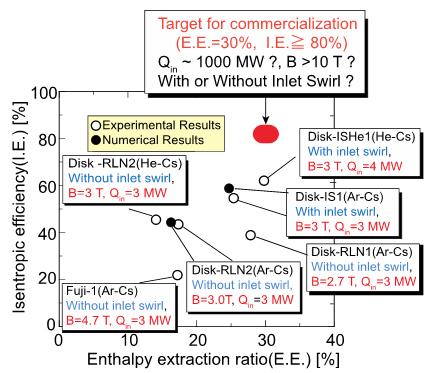 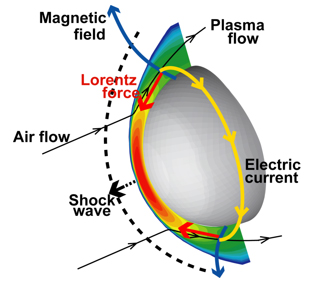 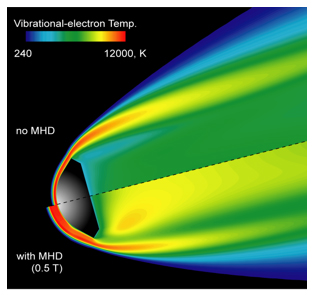 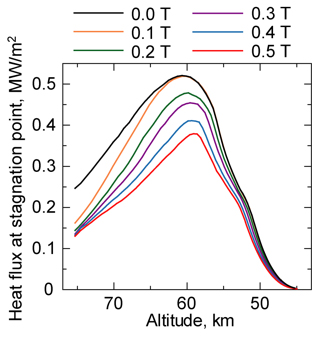