Complex fluids are defined as fluids that have mesoscopic inner structures, and change in the structures induced by flow causes complicated flow behaviors. Microorganisms swim in a solvent according to environmental conditions such as light intensity, gravity, and chemical concentration and form certain structures depending on circumstantial environment. This property is similar to the flow-induced structure of complex fluids, which motivated us to model bio-related-particle suspensions using the methodology of the analysis for complex fluids. Here we introduced two approaches, i.e. continuum and particle-based approaches.

In the continuum approach, pressure-driven flows of a phototactic microalgae suspension in a circular channel illuminated from its outer side were numerically analyzed. Microalgae were modeled by active phototactic particles. The light intensity distribution in the tube was computed based on the Lambert-Beer law. The phototactic behavior of the microalgae was described using a phototaxis function. Furthermore, the volume-fraction dependence of the suspension viscosity was expressed by the Krieger-Dougherty model.

The number density distribution changed with the illumination intensity according to their phototactic behavior and remarkably affected the velocity profile. Non-uniformity in apparent viscosity due to the algal distribution produced an anomalous velocity profile (Fig.1).

In the particle-based approach, the multi-particle collision dynamics (MPCD) was applied to the simulation of phototactic microalgae suspensions. The MPCD has been successfully used for the numerical simulation of complex fluids such as polymers and colloidal suspensions. In the present simulation, microalgae were also modeled by active phototactic particles, and the interaction among microalgae and solvent was computed based on the MPCD simulation. The light intensity distribution was computed according to the Lambert-Beer law, and the phototaxis function was used to model phototactic behavior of the microalgae. 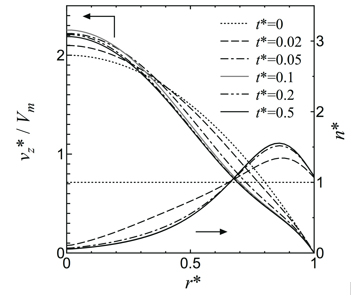 Fig. 1 Temporal changes in velocity profile νz*/Vm and number density n* of flows of a microalgae suspension in a circular tube channel. 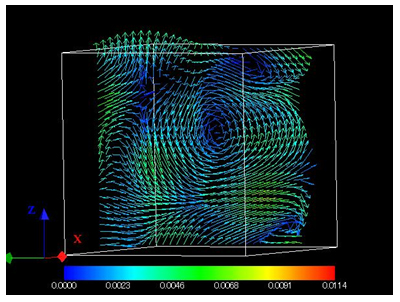 Fig. 2 Example of numerical results of MPCD simulation of bio-convection in a phototactic microalgae suspension: Snapshot of velocity field.