A flow diagnostic technique based on an EFD/CFD hybrid analysis approach and a smart data visualization has been developed to elucidate vortical flow phenomena in fluid machinery. The diagnostic technique has been applied to the breakdown of tip leakage vortex in compressor rotors, the rotating stall inception in a low-speed axial compressor rotor and a multi-stage transonic axial compressor, and the three-dimensional behavior of tip vortex in half-ducted propeller fans.

The breakdown of tip leakage vortex has been investigated on a low-speed axial compressor rotor with moderate blade loading. Effects of the breakdown on the rotor aerodynamics were elucidated by Navier-Stokes flow simulations and the smart data visualization techniques for identifying the breakdown. The leakage vortex breakdown occurs inside the rotor at a lower flow rate than the peak pressure rise operating condition. The breakdown is characterized by the existence of the stagnation point followed by a bubblelike recirculation region. The onset of breakdown causes significant changes in the nature of the tip leakage vortex: large expansion of the vortex and disappearance of the streamwise vorticity concentrated in the vortex as shown in Fig. 1.

The unsteady behavior and three-dimensional flow structure of rotating stall inception in an axial compressor rotor have been investigated by the EFD/CFD hybrid analyses. In order to capture the transient phenomena of the stall inception experimentally, an instantaneous casing pressure field measurement technique was developed. In addition, the details of the three-dimensional flow structure at the rotating stall inception were analyzed by a numerical approach using the detached-eddy simulation (DES). It was found that a leading-edge separation occurs near the tip at the onset of the rotating stall and grows to form the tornado-like vortex connecting the blade suction surface and the casing wall as shown in Fig. 2.

The three-dimensional structure of the tip vortex in a half-ducted propeller fan has been investigated using DES results and LDV measurement data. The formation process of the tip vortex was elucidated by showing velocity and vorticity distributions in several cross-sections along the tip vortex center, as shown in Fig.4. 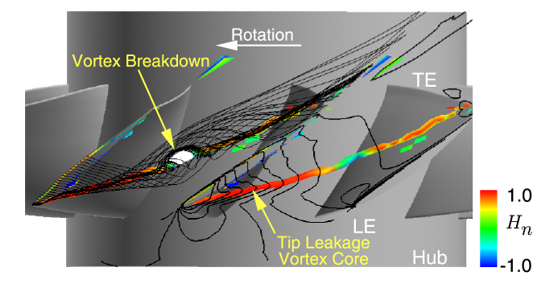 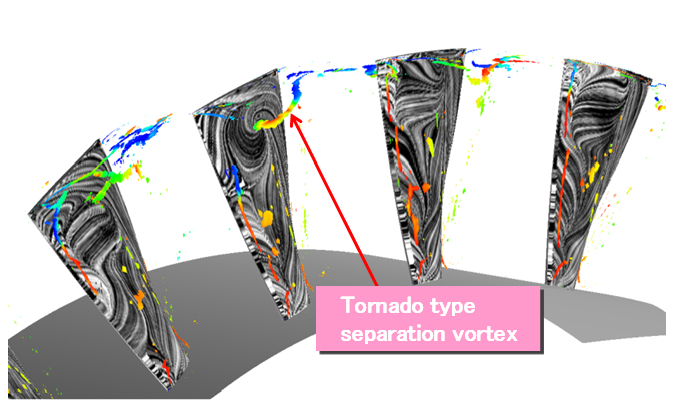 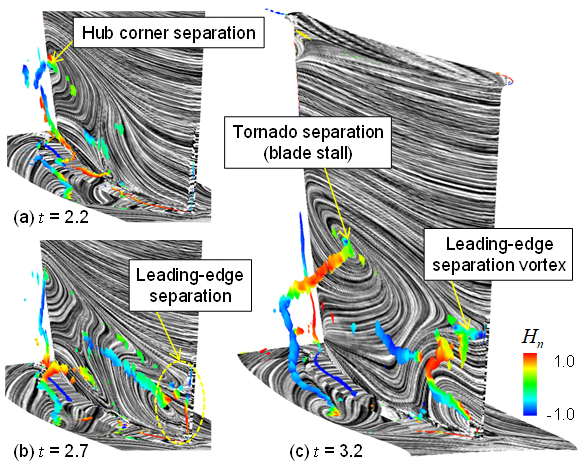