Cavitation and dissolved gas: Toward more reliable prediction of cavitation

Cavitation is a well-known phase change phenomenon which causes various problems in hydraulic machinery such as performance deterioration, unsteady flow phenomena, erosion and so on. Many studies have been devoted for deeper understanding of this phenomenon, but the accurate prediction in complex flow field of actual hydraulic machines is still very difficult. The effect of dissolved gas in working liquid is not well understood yet, which is one of the reasons for this difficulty. We have been studying about when, where and how the effect of dissolved gas appears in simple cavitating flows such as around hydrofoils, in convergent-divergent nozzles and so on.

Fig. 1 shows lift and drag characteristics of a cavitating Clark Y-11.7% hydrofoil at the angle of attack of two degrees. Photos below show typical examples of cavitation after the lift breakdown. We can easily recognize the difference of forms of cavitation; in the low DO (amount of dissolved oxygen) case, a film-like cavity attaches on the blade surface from around the mid-chord (near the minimum pressure point), while in the middle and high DO cases, many tiny bubbles continuously appear and flow along the blade surface. The lift and drag performances are also different depending upon the forms of cavitation. For this angle of attack, the lift breakdown occurs at larger cavitation number σ (normalized ambient pressure) with significant increase of drag force in the middle and high DO cases. However, it is worth noting that the impact of dissolved gas on the hydrofoil performance is different at the other angles of attack. The blade loading as wall as the boundary layer characteristics should be considered for better understanding of the phenomenon.

Fig. 2 shows typical cavitation inception which occurs at the wall of a two-dimensional convergent-divergent nozzle. In the high DO condition, many bubbles appear and they never attach on the nozzle wall, probably because highly turbulent flows induced by bubbles themselves do not allow them to stay on the wall. Actually, in the middle DO condition, patch-like cavities attach on the wall at the cavitation inception, while with the decrease of cavitation number σ, they disappears with the increase of flowing cavitation bubbles. Also the value of cavitation number is different among three DO cases. This indicates the difference of gas partial pressure inside cavitation bubbles, which leads to the difficulty in the cavitation prediction especially at actual field operation of hydraulic machinery.

We believe that simple studies such as above will be still useful for more physical understanding of the effect of dissolved gas on cavitation. We are also working on the numerical modeling of cavitation and dissolved gas toward more reliable prediction of cavitation in hydraulic machinery. 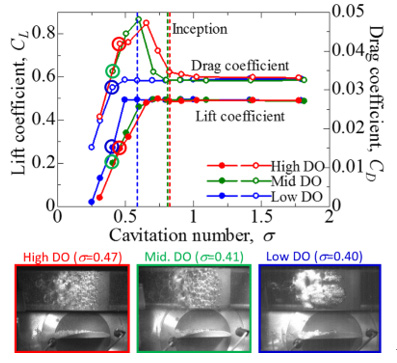 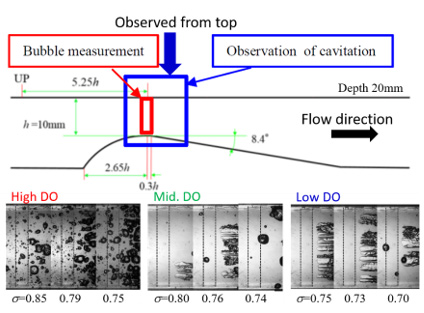 Fig. 2 Formation of sheet and bubbly cavitation in a 2-D converging-diverging nozzle for three different DO (dissolved oxygen) cases.
Back