Aiming at the formation of monodisperse micro-droplets, droplet formation in microfluidic flow-focusing devices with two different widths of the orifice is observed. Figure 1 shows the merging part structure of the device and Table 1 shows channel size. In the experiment, pure water is used as the dispersed phase and either mineral oil or silicon oil is used as the continuous phase to examine the influence of the viscosity on the droplet formation. The diameters of the generated droplets become smaller as the flow rate of the continuous phase increase and monodisperse water droplets with a minimum size of 6.5 μm is generated. The break up process might be classified into three regimes by the value of dividing the capillary number by the orifice width. At low capillary number, the dispersed phase blocks the orifice and breaks into droplets. Therefore, the diameter generated at the same velocity is smaller when the channel with smaller orifice is used. In addition, the diameter is reduced by using oil with a large viscosity as the continuous phase. Therefore, it is assumed that the shear force has a large effect on droplet formation. On the other hand, when the capillary number is high enough that the thread of the dispersed phase is thin and long and droplets are broken up at the downstream of the orifice, the effect of the orifice width on the diameter becomes small. The thread stretching by shear force seems to break up into droplets in an attempt to reduce surface energy. It is inferred that smaller droplets are produced by using oil with a large viscosity as the continuous phase and increasing the oil flow rate. 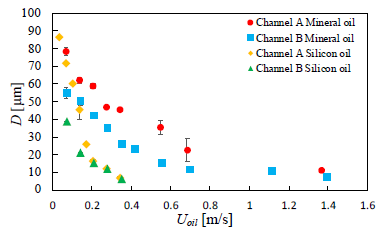