Life in the Jomon period was based on activities such as hunting, fishing, and gathering. In addition to examinations of archaeological objects, investigations by researchers outside the discipline of archaeology demonstrate the intelligence and technology required to turn plants into food and hunt for animals. For example, by actively sieving through the soil of archaeological sites located inland, fine samples which have escaped decomposition can be obtained. At Jomon archaeological sites in northern Japan, the bones of freshwater fishes, such as herring, salmon, carp, redfin dace, and crucian carp have been discovered, together with traps and spears used to catch them. This suggests that fishing techniques developed in inland freshwater locations. Furthermore, seawater fish have been found inland, implying the existence of a sea-to-land interaction network.

People living in the Jomon period gathered nuts such as chestnuts, walnuts, and acorns for food. In addition, a diverse variety of plants such as Japanese red elder, mulberry, berries from the rubus genus, grapes, and pepper have also been discovered. Furthermore, closer observation of starch that is attached to earthenware and stone tools reveals the existence of not just nuts but also rhizome root stocks and legumes. This not only provides direct evidence that grinding stones and stoneware were used to process starchy foods but may also indicate that these stone tools were adapted for diverse uses to increase efficiency, based on the forms and of the starch and stone tools and usage traces.

People from the Jomon period understood the characteristics of animals and plants, developing and improving on technology in order to process and make use of these food resources. Not only were they using tools, but they were also improving their tools so as to increase the amount of catch, enhance efficiency, and process food in large batches. In this way, they were able to collect diverse food resources in a balanced manner and turn them into food, and this formed one of the economic underpinnings of their existence, which spanned more than 10,000 years. 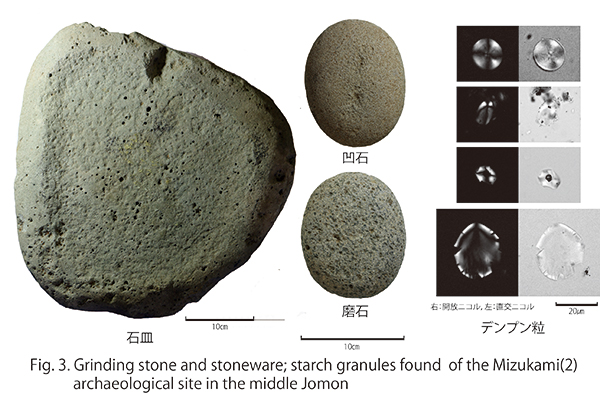