We, third-year students from the mechanical engineering department of Hokkaido University, participated in “The 19th The Flow Dream Contest” as a group, called cirir, a word used to describe “flow” in Ainu. The theme of this contest was “Evoke the beauty of flow!” We were required to make a product and a video to present our work. Long story short, we made a music box which plays some sound of water drops by dropping super balls into fluids with various viscosity. Thankfully, we won the first prize in this contest. From now on, let me tell you about our journey to the first prize.

The reason why we participated in this contest

The reason why we took part in this contest is simple. Mr. Tasaka, who was teaching fluid dynamics, introduced this contest and engaged students to participate. I didn’t know why but I just couldn’t stop thinking about it. Since working on my own seemed to be hard, I invited my friend to join this contest.

The theme of our product

As our presentation was video format due to COVID-19, we needed to keep the theme simple. After discussing several ideas, we decided to work on “making sounds with fluids”.

We only had one month to work on this project, but it did not go well for a couple of weeks; Experiments that we conducted ended up failing.

The first experiment was to drop a droplet on fluids with different viscosity and measure the dripping sound or frequency. However, the sound was so small that we could not measure its frequency.

In the second experiment, we dropped a bead, a metal ball, and a one-yen coin on several types of fluids: water, glycerin aqueous solution, and dilatant fluid (Figure 1). This also ended up in failure because the dripping sound was drowned out by the sound that was made when the dropped hit the bottom of the container. Also, glycerin aqueous solution with high viscosity and dilatant fluid did not produce sound.

While the deadline was coming up, we continued to brush up our experiments and conducted experiments over and over. After having some experiments, we figured out that superballs could make the dripping sound without hitting the container. Figure 2 shows the experimental equipment. We used an aluminium panel and a bowl as reflectors to collect sounds better. 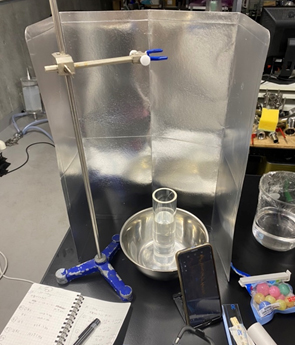 To be honest, the data we collected were not what we expected. We estimated that the frequencies would show some patterns depending on the viscosity, but we could not see any patterns from the data.

Figure 3 shows a sample graph of frequencies. The ball was dropped from 30 cm above sample fluid A, and we recorded the frequencies when the ball reached around the lowest height. In this graph, frequencies are plotted to make the highest frequencies aligned.

Figure 3. The sample graph of frequencies

Even though there were no patterns, we noticed that the pitch of sound changed when dropped from different heights.

Although we gave up making musical scale from dripping sound, we decided to create a product that makes different pitches of dripping sound by dropping superballs from different heights.

Hopefully, we finished making our final product with the help from a technical staff. Our product is shown in figure 3. The layers with balls could be set at any height; the dripping sound could be made by moving the gold sticks. 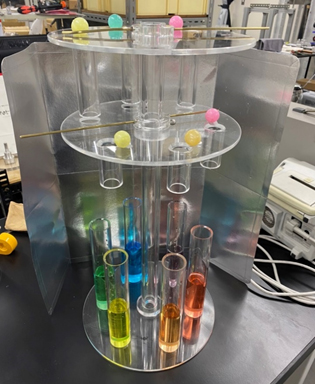 In this contest, making a product was not the only requirement. We also needed to make a video to present our final product. As we heard that our seniors did enjoyable presentations, we decided to make our presentation like a picture-story show; we became Flow Sommelier and Sound Sommelier.

After taking part in this contest

Due to COVID-19, this was the first time conducting experiments since the freshman year. Also, as we are still third year in university and not in laboratory yet, this was our first time working on a project like this. When experiments ended up failing, the idea to change our theme popped up, but we continued to stick to the theme, “making sounds with fluids”, and this hopefully led to success.

While having our project done in a success, the relationship between fluids and dripping sound is left as a complete mystery. So, I think that some more improvements could be made to get better results. For example, using a sound-collecting microphone in a soundproof room or using a superball that is closer to a complete sphere could led to better data.

Anyway, participating in this contest was worthful; this experience would be special and valuable in the future. If I did not take part in this contest, I would be regretting and thinking “what if I did participate…”. There was so much to learn when working on this project.

I am so pleased to go through this experience and win the first prize. I want to appreciate and thank my team member, Mr. Tasaka, Mr. Sanpo, everyone in FLC lab, and everyone in the Japan Society of Mechanical Engineers.