Recently, tornado has been recognized as one of meteorological disasters in Japan. However, the process of tornadogenesis is still not understood. Most of tornadoes cannot be observed through Doppler radars, because of their rough resolutions. Usually, laboratory experiments focus on the structure of tornado-like vortex and wind load by tornado. The present report introduces our experimental approaches to investigate the flow environment of tornadogenesis.

Non-supercell tornadoes are generated from vertical vorticity in local fronts stretched by the updraft of cumulonimbus. Such flow environment can be simulated with a cold gravity current and an updraft by a fun. A cold gravity current can be generated through our outflow simulator. It composed of Peltier cooler, radiator and fan can control temperature and velocity profiles of cold outflow. The local front is formed at the front and both sides of cold outflow. If we set the fun on the local front, tornado-like vortex occurs as shown in Fig. 1. We can investigate the condition of tornadogenesis, such as relationship between updraft velocity and outflow velocity, and so on.

The cold outflow has the velocity profile of low-level jet. Then, if we set the fun on the center of cold outflow, the horizontal vorticity of vertical shear is tilted to be a pair of counter-rotating vortex as shown in Fig. 2. Such mechanism of vortex generation illustrates the developing process of a mesocyclone in a supercell.

The flow environment of supercell tornado can be simulated through a mesocyclone simulator and the outflow generator. The mesocyclone simulator is almost the same with traditional tornado simulators, but there is free space between its bottom and floor. Therefore, cold outflow can freely flow regardless of the attack angle of vanes to set the rotation of mesocyclone. As shown in Fig.3, various tornado-like vortices can be generated, depending on the swirl ratio and the height of mesocyclone. A pair of counter-rotating vortices shown in Fig.4 and multiple-vortices shown in Fig.5 are observed in actual supercells. We expect that the experimental conditions realizing tornado-like vortices will be helpful to improve the accuracy of tornado watch. 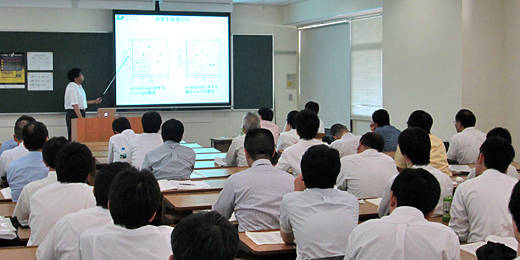