The measurement and modeling of unsteady fluid forces acting on robots in swimming motions are introduced. Two robots were developed for this purpose. One is an underwater robot arm for the fluid forces acting on limbs and the other is a swimmer mannequin for those acting on body trunk. The robot arm has five degrees-of-freedom in order to perform the various complicated limb motions during swimming (Fig. 1). In addition, by changing the hand replica into the foot one, the robot also can perform the lower limb motions. The joint torques and the resultant thrust can be measured by the force sensors attached to the robot. In a circulating water tank, an experiment to measure the fluid forces was conducted for four swimming strokes of the upper and lower limbs. Two fluid force coefficients, which are the parameters in the fluid force model, were identified using optimizing calculation, so that the discrepancies of the forces and moments between the experiment and simulation were minimized. In addition, fluid force models which are dependent only on the limbs’ shapes were determined. Good agreement between the experiment and simulation with the determined fluid force model indicated the validity of the determined model (Fig. 2). The swimmer mannequin robot consisted of a swimmer mannequin and a driving mechanism. The scale of the swimmer mannequin was 1/2 (half scale) and the three-dimensional shape of an athlete swimmer taking the gliding position was reproduced in detail (Fig. 3). The driving mechanism could move the mannequin in the pitching, heaving and rolling motions. Using the swimmer mannequin robot, the trunk motions of four strokes (crawl, breast, back and butterfly) were reproduced, and the unsteady fluid forces acting on the mannequin were measured by the dynamometers installed in the robot. The fluid force coefficients in the model were identified so that the simulated fluid forces became as consistent as possible with the experimental ones for each stroke case. The identified coefficients were then unified into ones which can be used for all cases. It was found that the overall performance of the simulation using the determined fluid force coefficients to predict the time variation of the fluid forces was satisfactory (Fig. 4). 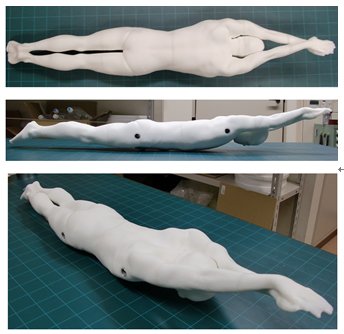 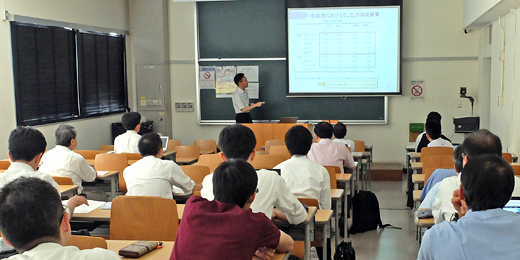