Japanese energy situation has greatly changed since the Great East Japan Earthquake and the accident at the Fukushima nuclear power plant. Import of fossil fuel is increasing because most of the nuclear power plants are shut down. IGCC (Integrated coal Gasification Combined Cycle) is a promising technology to solve the difficult energy problems in Japan.

In order to burn coal in gas turbine combustor, it is necessary to gasify coal, changing from solid to gas. Therefore, the coal gasifier is very important in IGCC systems. After coal is pulverized about 50 micrometers in size, coal is fed to the gasifier and instantly gasified at above 1800 °C in combustor. This gasification process in combustor is very complicated simultaneous reactions comprising of three-dimensional fluid dynamics, combustion, heat transfer and chemical reaction both endothermic and exothermic.

In Japan, development of IGCC was started 10 years or more later than in Europe and in United States. However, after the successful operation of 250MW Demonstration Plant at Nakoso in Iwaki-city, Fukushima Prefecture, IGCC technology in Japan is regarded as one of the best in the world. This successful result is achieved through collaboration of government, research institute, manufacturers and power companies. 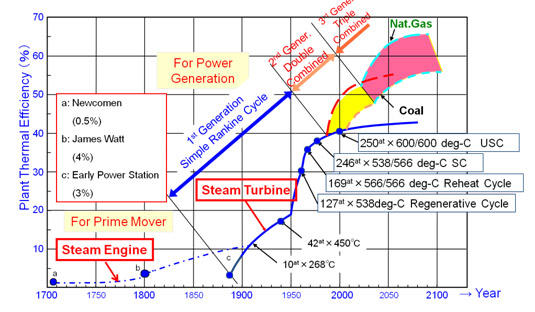