The fastest supercomputer in Japan named “K” is now open for public use since autumn, 2012. Not only the computer performance, but also the software development for science and technology is highly expected. Under this concept, we have been developing the software for medical application, especially biomechanical simulations using medical image data. In this article, two of the developed numerical methods are briefly explained. One is a full-Eulerian fluid-structure interaction method [1] which is suitable for medical image data. The other is an ultrasound therapy simulator [2] for minimally invasive treatment.

A full Eulerian fluid-structure interaction method is the novel simulation method for solving fluid-structure coupling problems suitable for the massively parallel computing. All the basic equations in continuum scales are numerically solved on a fixed Cartesian grid with finite difference discretization. An incompressible fluid flow solver is extended to the incompressible fluid-structure system. A volume-of-fluid approach, which has been developed for computing multiphase flows, is applied to describing the multi-component geometry. So, the present method treats non-linear deformation of hyperelastic materials in fully Eulerian way on a fixed grid without generating the boundary-fitted meshes. The simulator is developed for the massively parallel computation and the excellent scalability of the computation is achieved which end up with the actual speed of 4.5 peta flops.

An ultrasound therapy simulator is for the High窶的ntensity- Focused-Ultrasound (HIFU) which is used for the ablation of cancers. HIFU therapy is rapidly spreading technique and many kinds of devices have been already in commercial use. We have been working on the development of the first domestic products of HIFU therapy device and the simulator is used for designing the device. Some of the simulation results are shown in this article.

As a summary, not only the above-explained methods, but also several other methods are developed for the medical applications. Some of those programs are now open to public use through the website of ﾂhttp://www.csrp.riken.jp/application_j.html 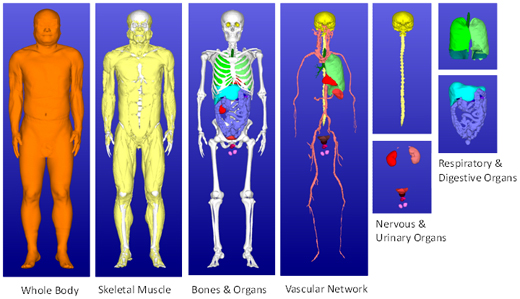