In the transitional channel flow, the large-scale intermittent structure of localized turbulence, which is called turbulent stripe, can be found in the form of stripe arrangement. The structure of the turbulent stripe is laminar-turbulent banded pattern being oblique with respect to the streamwise direction (Reτ = uτδ/ν = 64 and Roτ = 2Ωδ/uτ = 0.02 in Fig. 1, uτ: the friction velocity, δ: half the channel width, Ω: system angular velocity). We performed the direct numerical simulation at the transitional Reynolds numbers and very low-rotation numbers, with focusing on the turbulent stripe in the plane Poiseuille flow subjected to spanwise system rotation.

Rotating plane Poiseuille flow is known to consist of a suction side and a pressure side. On the suction side of the channel, where the system rotation has the same direction with the vorticity of the mean shear, the flow becomes stable. Even for turbulent states, the stable stratification of the half channel would attenuate turbulent motions in this region. On the pressure side, the flow becomes unstable due to the Coriolis-force instability, and the longitudinal roll cells may occur as an initial stage of laminar-turbulent transition and survive even with turbulent background at high Reynolds numbers. We captured the turbulent stripe in rotating channel flows (Fig. 1).

Fig. 2 shows each component of the velocity fluctuations u’i (ui = Ui + u’i, Ui:mean velocity, u’i:velocity fluctuation) in rotating plane Poiseuille flow. It is obviously observed in (a) of the figures that streamwise streaky structures are not evenly distributed and seems to form bands or clusters. The intermittent stripe pattern can be determined in Fig. 2(b). As for the spanwise velocity fluctuation, somewhat coherent structures are clearly seen to emerge around the turbulent regions, as shown in Fig. 2(c). In common with the streamwise component, either positive or negative fluctuation of spanwise component dominantly appears in the upstream area of the turbulent region, while w’ with the opposite sign dominates the downstream area. This phenomenon is the spanwise secondary flow of interest.

The spanwise mean velocity and the skewness factor of the spanwise velocity fluctuation are given in Fig. 3. Although their averaged values should become zero in the turbulent channel flow, they have significant magnitudes in the flow state accompanied by turbulent stripe because of the spanwise secondary flow along the turbulent bands. It is interesting to note that, at very low rotation number, they are significantly increased compared with those in static system. At high rotation numbers, the peak value of the spanwise velocity component decreases. This reduction is caused by the development of the longitudinal roll cells due to a strong rotation. 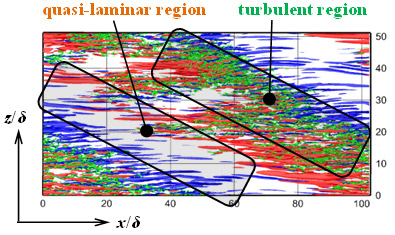