Friction drag reduction effect of passive blowing on a Clark-Y airfoil is investigated experimentally. Passive blowing is driven by the pressure difference on the airfoil surface between the leading edge and the rear part of the upper surface, as shown in Fig. 1. The Clark-Y airfoil model actually built is shown in Fig. 2. A perforated metal plate with 0.5 mm diameter holes is used for the wing surface of suction and blowing regions. The experiment is performed using the 65 cm×55 cm low turbulence wind tunnel at Japan Aerospace Exploration Agency. The mean streamwise velocity profiles on the upper surface of the wing model were measured by a hot-wire anemometry at five streamwise locations. The Reynolds numbers based on the chord length are 0.65 × 106 and 1.55 × 106. The angles of attack are set to 0° and 6°. The streamwise mean velocity profiles in the blowing region and the downstream, shown in Fig. 3, are found to be shifted away from the wing surface. This behavior qualitatively suggests reduction of the velocity gradient on the wing surface, which indicates the friction drag reduction effect of passive blowing. Furthermore, we quantitatively assess the friction drag reduction effect based on the streamwise mean velocity profiles. Friction velocity at each measurement location is determined by fitting the slopes of a theoretical wall law taking into account the effect of pressure gradient and the experimental profile in the log-law region so that the effect of roughness is also considered (Fig. 4). As shown in Fig. 5, friction drag reduction effect of 4% - 23% is confirmed through this quantitative assessment. 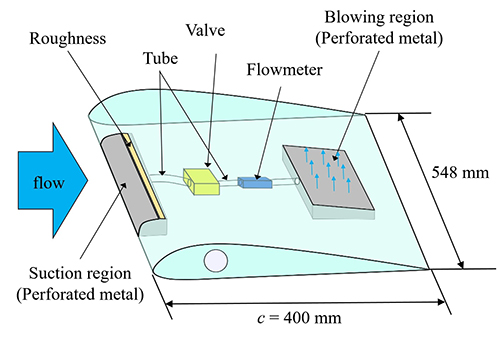 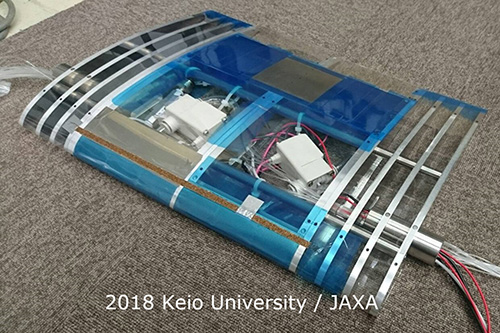 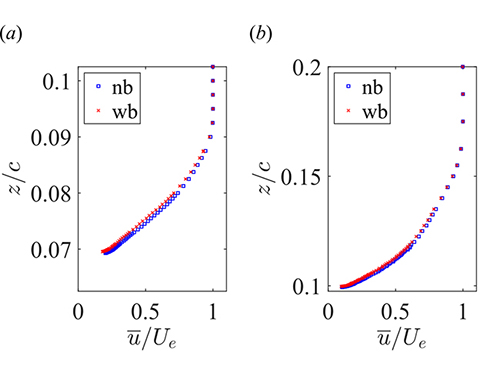 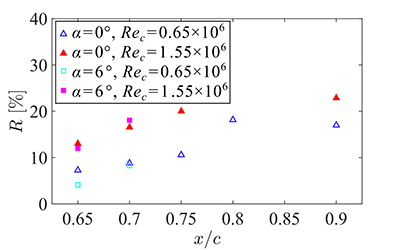