Stripe-like particle concentration formed under MHz-band ultrasonic irradiation have been investigated and reported by many previous researchers. This technique has been applied to the μm-order particle manipulation in water or air due to the advantages of noncontact and non-intrusiveness. To overcome this size-limitation in particle manipulation technique, the authors developed a new ultrasonic particle concentration technique. By irradiating kHz-band ultrasound, sub-mm- to mm-order particles dispersed in water are flocculated into a spherical swarm. This kind of particle flocculation is inevitably impossible for the conventional technique due to too short wavelength of MHz ultrasound. This phenomenon of spherical-swarm flocculation is caused by Acoustic Cavitation-Oriented bubbles (ACOBs) adhering to the particle surface. In general, the ACOBs receive the acoustic radiation forces: primary and secondary Bjerknes forces. When ACOBs on the particle surface receive the forces, the particles move to the high pressure region with the ACOBs and form the particle flocculation in water. In recent studies, we have found out that two flocculation patterns appear: spherical and chain-like ones; their patterns change with the components of dissolved gases in water. Under air dissolution in water, particles are flocculated into a spherical swarm of about 8 mm in diameter. Under CO2-gas dissolution in water, two to seven particles form chain-like flocculation. This difference in the flocculation patterns results from the difference in the air/CO2 bubbles’ motions. In the present study, we outline the relationship between the particle flocculation patterns and the gas components, from the results of visualization and the acoustic pressure profiles in water. 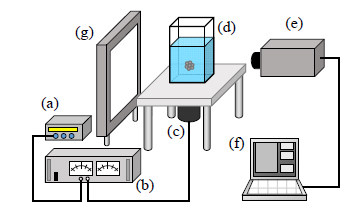 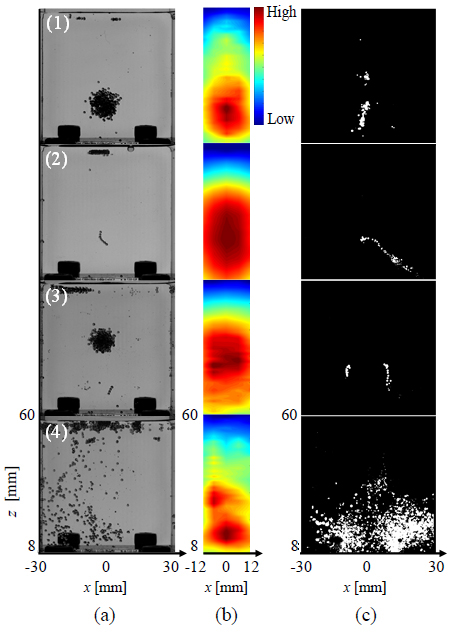